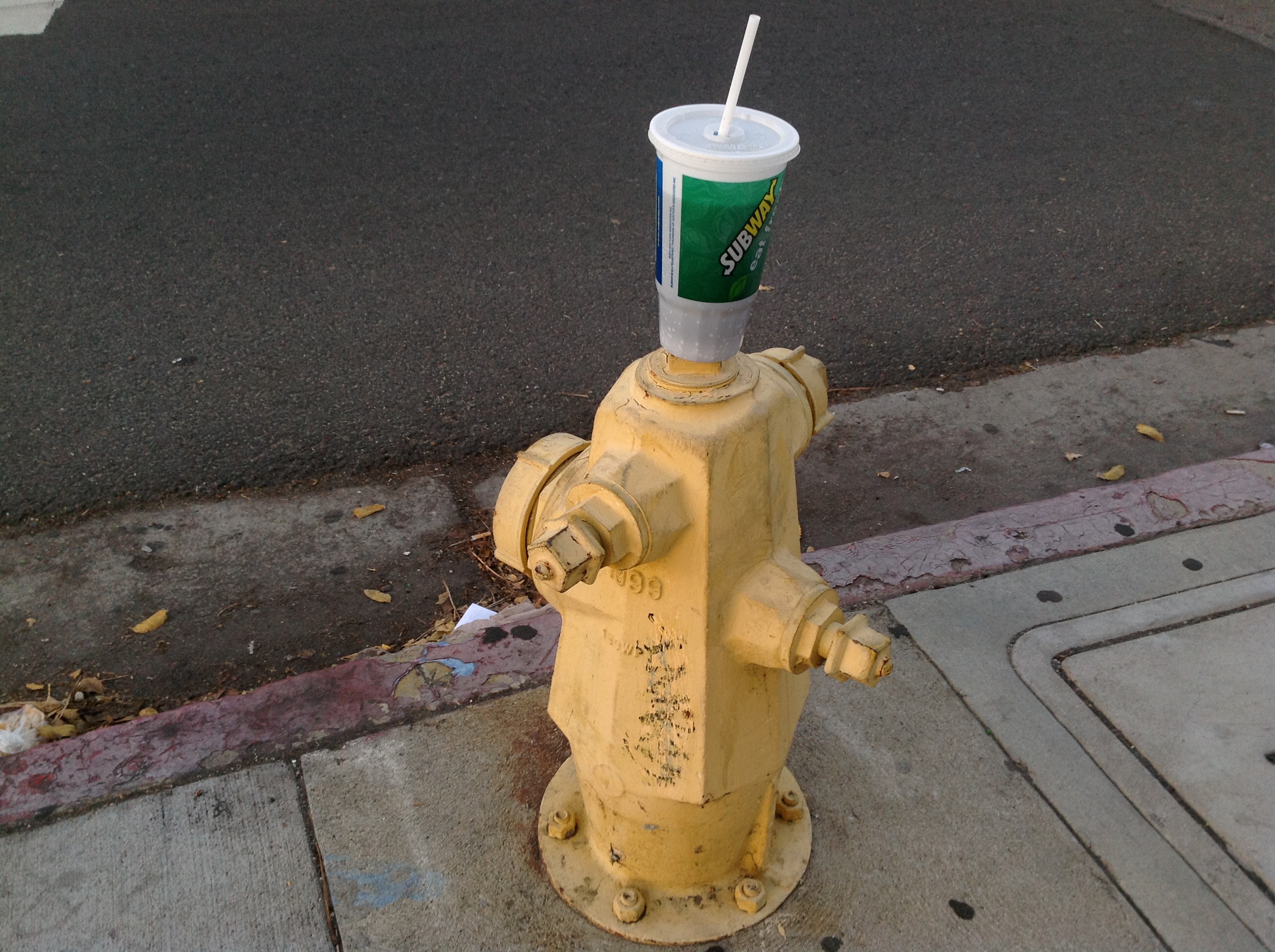 Above is a photo I took while walking down Van Nuys Blvd.

For each show, I walk through a different district of or near LA, take a series of photos, and try to assemble them into a tour of that area. For Van Nuys, I noted that the trash there has a “performance art aspect” to it, and this full Subway cup on a fire hydrant was a prime example; it’s as if the person leaving it there said, “If the hydrant breaks, now they have a backup.”

Right before showtime, I found out that standup comic Michael Alberici had gotten a flat tire on his way to the show, no spare (no hard feelings, Mike, we’ve all been there). Later, as I introduced the lineup, I explained the situation, and said “so I’ll try to make you laugh instead.”

How did that go? I’ll tell you in a minute.

First, the featured performers were, once again, spectacular.

– The opening video was a Clyde McFly original, released online for the Super Bowl but premiered at the Cavern. Two grown men crying over sappy advertisements. Check it out in the featured videos section.

– Tacklebox took the suggestion “whatever you do, take care of your shoes” and transformed it into: a father who passes on horrible, lazy genes to his son; two girls at a slumber party who don’t understand courtship rituals; an overeager Secret Service agent; a confessional booth in reverse; and more.

– The highly-anticipated radio play by Tessa Williams did not disappoint. With six people onstage using two microphones, providing sound FX, voice-overs, and multiple characters, we got a slice of life story about twin detectives book-ended by old-style radio ads for “fruit and vegetable wash.” Silly and pitch perfect.

– Johnny Ashkar of Crown City Krooks performed a few Krooks songs and a few of his own, filling the space with nothing but the sounds of his voice and an old acoustic guitar, picking and strumming and slapping it every which way and ending the night on a high note. Follow his band and check out their album when it drops.

Now, about my “making you laugh instead.”

My girlfriend / tech-booth-babe Jill told me after the show that she loved my off-the-cuff rambling about the pointlessness of NASA, the upside of destroying the environment, and how Ghostbusters is unrealistic because “no one can run a successful small business in this bullshit economy.” (These were all written and rehearsed standup routines, by the way, they just seemed like insane ramblings.) What was “off the cuff”: me knocking over the microphone stands multiple times and saying “I guess that’s why they have cords”; me mumbling “sexy, sexy, sexy” as Jill lowered the house lights, then apologizing for “doing an ODB cover”; me using the time Johnny was tuning his guitar between songs to remark “there’s tons of beers left, so feel free to grab one, you know, before getting in your car.” (Everyone laughed; no one got a beer.) Just a continuous stream of time-filling nonsense.

Also, my short sketch “It’s All Mike (and a bag of chips.)” was about as successful as it could be, given that I abruptly knocked over a microphone stand right when it started playing.

Returning to the original metaphor, if Michael Alberici was the fire hydrant, I was the Subway cup. Fortunately it all worked out in the end, making CoW #9 one of my weirdest, silliest shows yet.