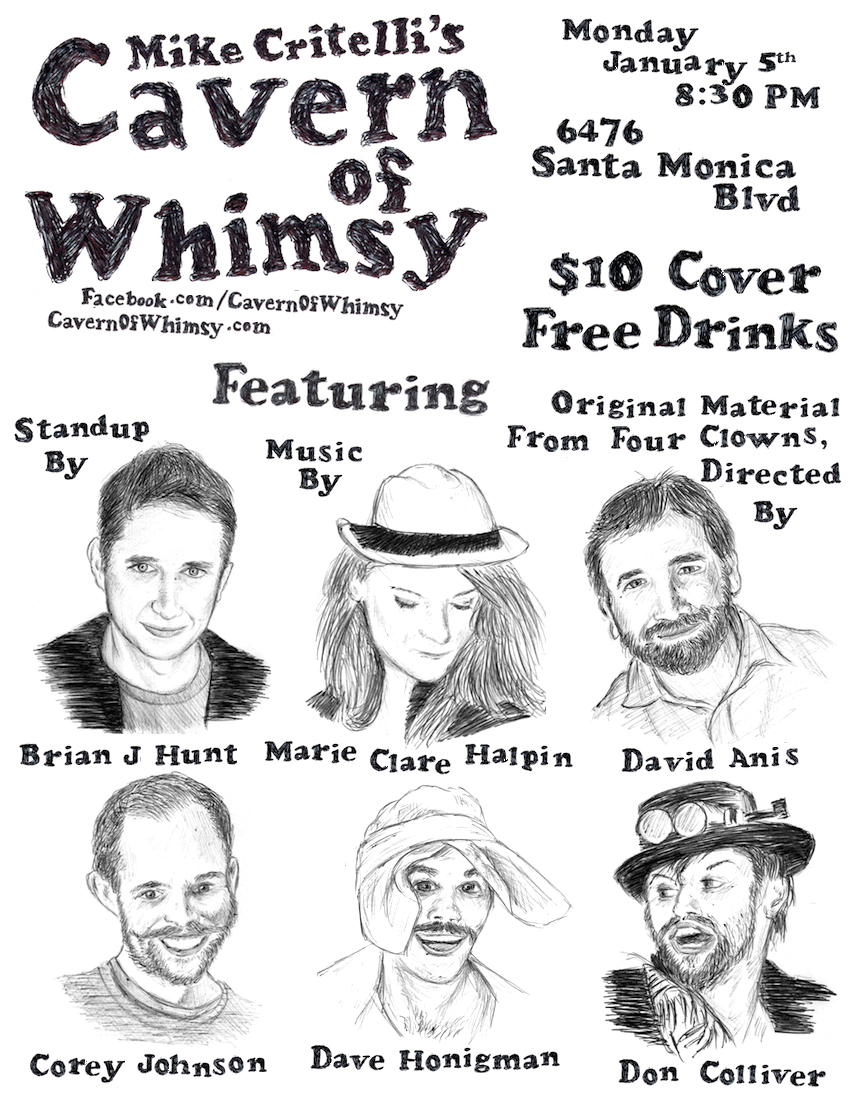 First, I’ve been at my parents’ house in Connecticut for the holidays, sketching the above poster and seeing friends in New York, and tomorrow morning I’m leaving for an extended family vacation that lands me back in LA on January 4th, the day before this show. I booked all the performers extra early for this one and prepped like crazy so I can have a clear conscience during a lovely 16-hour flight tomorrow.

Second, I’ve changed the text on the poster quite a bit from last month. Some things made the cut, some things didn’t.

This month’s show features some seriously heavy-hitters, all of whom you’d probably pay more than the $10 “cover” to see solo, all gathered in The Cavern on January 5th:

– Standup comedian Brian J. Hunt has performed at The Comedy Store, The Improv, Jon Lovitz Club, The Westside Comedy Club, and more. He’s also a sketch comic, improv comic, actor, and children’s book author, but we’ll just be enjoying his standup on this particular occasion, thank you very much.

– Marie Clare Halpin played The Cavern once before as part of bluegrass quartet The New Historians, but January 5th she’s going solo. Fortunately she’s been a touring musician for years, presumably to prepare for this specific show.

–David Anis directs Corey Johnson, Dave Honigman, and Don Colliver of Four Clowns, an absurdist theatre troupe that specializes in “live action cartoons.” They perform all over town, and I’m thrilled to have the opportunity to shower you in their ridiculousness.

–And as stated above, there’ll be a new “SoCal Slideshow Tour” (Christmas in Koreatown) and a new “Outrageous Animated Short” (new character: a deceitful pimp named “Señor Zebra”). But that goes without saying.

Also, I’ll throw in the 10-minute standup set I premiered at The Revision Lounge in NYC this past Thursday night, assuming I survive the 16-hour flight home.

Enough! The facts are on the poster, and here:

At 8:30, Monday night, January 5th, at The Ruby Theatre, inside the double doors at The Complex, on the right, Cavern of Whimsy will begin for an 8th time.

Pre-order tickets on Brown Paper Tickets, or pay $10 cash at the door. Your choice.

If you were planning to miss it, make it your New Years Resolution not to!