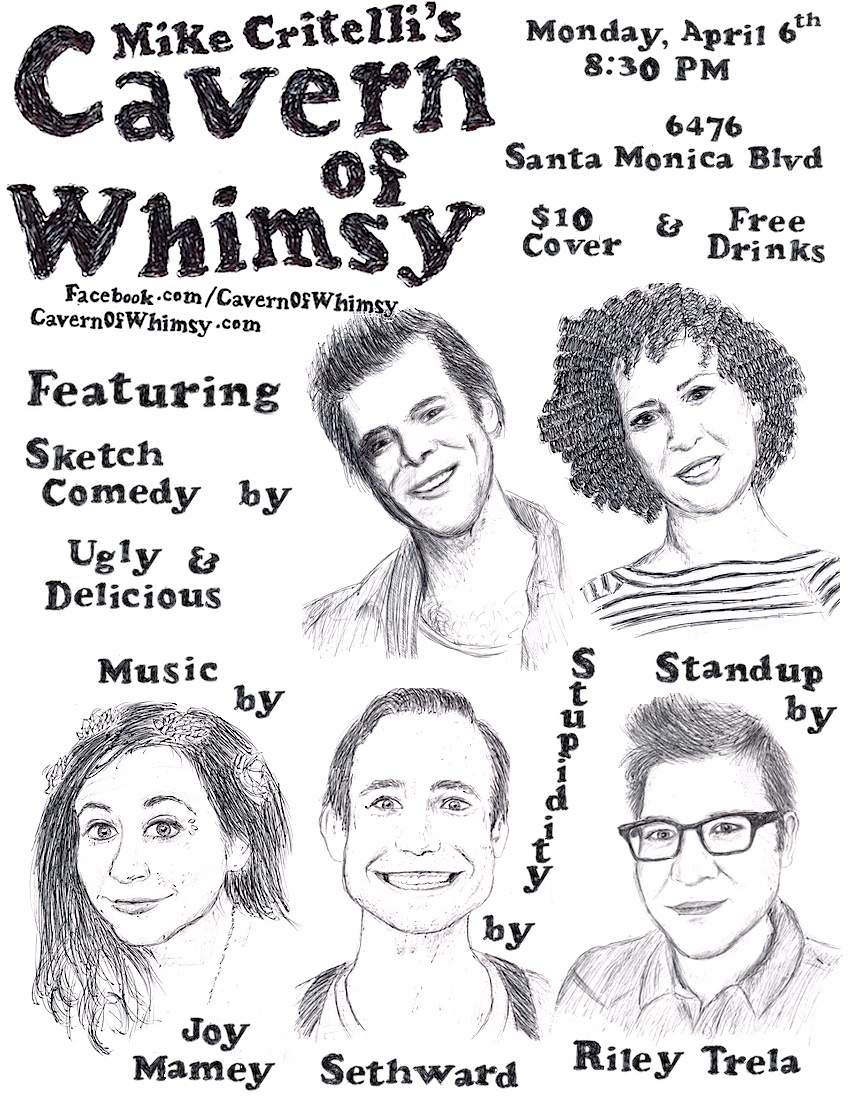 Good things come to those who wait.

I’m writing this late Friday afternoon. The show isn’t this coming Monday — it’s the following Monday — but usually the promo materials go out on a Tuesday or Wednesday so people have a few days to get excited about it before the weekend.

No such luck this time; the weekend is already here.

Fortunately, while you were waiting, I’ve been busy assembling one of the most exciting lineups you’ll ever see, this April or any April:

– Ugly & Delicious is actually Muriel Montgomery and Nick Casalini; I don’t know where “ugly” comes from because they’re both delicious. This is the hugely popular sketch show they’ve been honing at iO West and The Nerdist, and now it’s ready for prime time! (How’s my self-aggrandizement? Doing anything for you?)

- “Stupidity by” is how Sethward asked to be credited, don’t worry. I last saw him at a show by The Innocents where he nearly destroyed the set in an Evil Knievel parody. What he’s got planned for CoW #11, no one knows. I told him to keep the Cavern intact, but everything else goes.

- Cavern original David Croom (of CoW #1!) has been begging me to book the funny and talented Riley Trela from the very start of this show, and I finally got around to doing it. To those who wait, good things come, indeed.

- Finally, we last saw Joy Mamey at CoW #2 in July, playing a few comedic songs to an adoring crowd. Since, she’s joined iO West’s The Deltones and risen up the ranks at ComedySportz LA, but will be closing the show with a few non-comedic songs. What’s going on here? Whimsy, that’s what.

Waiting is the hardest part. But I’m writing this late, so you won’t be waiting very long.

The facts are on the poster, and here:

At 8:30, Monday night, April 6th, at The Ruby Theatre, inside the double doors at The Complex, on the right, Cavern of Whimsy will begin for an 11th time.

Pre-order tickets on Brown Paper Tickets, or pay $10 cash at the door. Your choice.

Oh, boy, is this gonna be great or what?